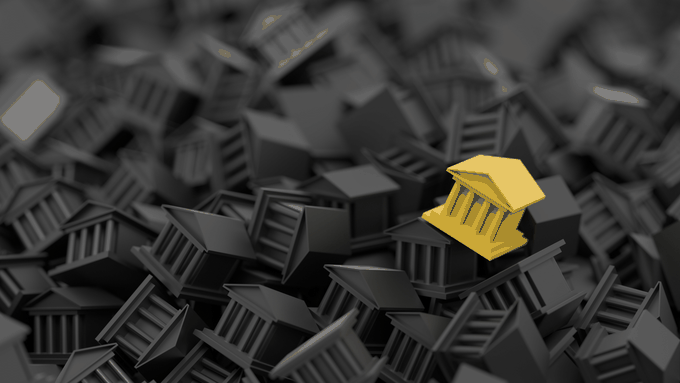 Find out why and how the game is changing to produce indiscriminate selling. For some companies the fundamentals are intact, which means you can get them at bargain prices. Stock picking has never been more important!

Forget about the banks, the selloff in big insurers and stocks like share registry operator Computershare (CPU) highlight how selling is now so indiscriminate that it includes stocks that actually benefit from rising interest rates i.e. those that have to hold big licks of cash. The Blue Chips we like have strong balance sheets hence little danger of insolvency, have dominant market positions, are cash flow positive and in most cases are growing earnings. More to the point, based on these factors, they are undervalued now more than ever.

The key to their profitability, net interest margins should rise from recent historical low levels due to a combination of rising interest rates (increasing their income) and mortgage customers rolling off low margin fixed rate loans and onto variable (reducing their costs). It is encouraging that the RBA Governor Philip Lowe said that the big banks’ balance sheets are very strong (reiterating statements from the financial regulator APRA) and that economic growth continues to rebound from depressed pandemic levels. It may be the second-tier lenders and recent market entrants that are more at risk, particularly if they do more unsecured lending. I’ll get to BNPL in a second.

The Focus on Inflation Obscures the Real Story

While the global phenomenon of climbing inflation and consequential higher interest rates are the bogeymen getting people excited, much of the selling is due to unwinding market froth from investor market leverage, mainly in the US.

Central to this is the collapse in the crypto market, because it is so entwined with the stock market. Investors, big and small, have been able to secure loans on margin through owning crypto at rates as high as 20 to 1. Some investors have only had to put up 5% of collateral to borrow the remaining 95%. Investors owning both stocks and crypto assets in vehicles like the zero-commission charging online broker Robinhood. They own crypto on the one side and stocks on the other, flicking money between the two. Margins are called from a declining crypto destroying the equity in the account, they use their stocks to fund the debt. During the financial crisis, people also used the stock market as an ATM when markets for other securities seized up.

The BNPL business models will need to change as they move from rapid growth to a more ‘steady state’ with rising bad debts and industry consolidation to minimise fixed costs. Bad debts will markedly reduce profitability because they don’t have the safeguards that are built into their much bigger banking counterparts.

Why Techs are Under Pressure (Valuation Theory)

A factor specific to the US is its heavy weighting to high priced technology stocks, which brings me to valuation theory, where three things are going on:

Of those three only the second is easily quantifiable. We would suggest, however, that the cash flows of strong companies will remain just that, strong. The world has not changed in a material sense. It is simply that much, if not all of the “blue sky” based investing (or punting) linked to ultraloose monetary policy (think quantitative easing) is being put to the sword.

Any asset is valued on its future cash flow stream, discounted back to the present day. Part of that valuation is based on the “terminal value”, which assumes earnings ad infinitum.

The valuations of blue-sky technology companies are not based on near-term earnings, because they don’t have any. This means that it is mostly based on the terminal value, which is the most sensitive part of any DCF valuation to changes in interest rates, those cash flows being the farthest out. It is the compounding effect.

Clearly zero interest rates generated a level of exuberance that was unrealistic. If you added up all the valuations of the blue sky stocks in the past bull market, it would be several times the value of the global economy! Rising interest rates has produced a situation where the chickens are definitely coming home to roost.

On a fundamental level, technology innovation is one thing, but making money on the stock market is another. Technology innovation generally benefits the consumer first and then subsequent iterations can benefit the investor. Alternatively, some technology companies can make abnormally big profits for a time and then the market catches up and there is consolidation and poor performers go bankrupt (think BNPL).

A Lesson from Deek: Invest in Value (And a Good Pair of Running Shoes)

When I was (much) younger I watched the Olympic marathon coverage and there was a runner in his early 20s who only 5 kilometres into a 42 plus kilometre race was leading by what looked like a country mile. The great Robert de Castella was commentating and said something like: “He feels really good now, but he’ll be punished by the pack within a few kilometres.”

Deek was bang on. A runner back in the pack, the courageous Gelindo Bordin from Italy, who was just shy of 30 at the time, went on to win, chasing down the two front runners at the end of the race. The Italian commentary team went absolutely crazy, I remember. I didn’t see the other guy finish. The value philosophy wins over time because consistent earnings won’t always be popular, but they provide a significant measure of reliability, not to be underestimated in an uncertain world.