Put Your Foot On The Gas

UTRR mining analyst Peter Chilton looks at the changing face of the international and domestic gas markets, which has produced opportunities for investors in small cap gas developers.

We all know that the price of gas has climbed after Russian tanks rolled into the Ukraine with subsequent sanctions and Russian blackmail threatening to cut Europe from its main supplier. But in our own market the squeeze on supply has been happening for some time, which has meant that prices have been ratcheting up, albeit more steeply in recent times as the squeeze intensifies. How did it get to this? Let’s find out.

Gas in Australia used to be plentiful and cheap. But over time, as older lower cost fields became depleted and CPI linked gas supply contracts came up for renewal, the price of gas increased. Additionally, moratoriums on gas exploration, particularly in NSW and Victoria, reduced the supply.

Gas that had previously been readily available at A$4-5 a gigajoule was now being replaced by new gas at A$8-10/GJ. This has been a threat to industry survival.

Although coal seam gas had been extensively extracted in the US and elsewhere, attempts to extract CSG in Australia had proved elusive until the early 2000s in the Surat Basin, Queensland. Such was the scale of discovery, a brand new industry was formed based on liquified natural gas exports, principally to Asia. LNG exports through the port of Gladstone in CY21 were a record at 23.3 million tonnes

Our outstanding performance speaks for itself. Grow your portfolio and join now for $59 a month

So higher international gas prices are now affecting markets in Australia. Why is that?

Compared to gas sales in many countries which were linked to some form of international benchmark, Australian gas had been purely a domestic issue. However, due to the proliferation of export LNG contracts gas prices became linked to the oil price using a range of formulas. Now for the first time, international prices had the potential to have an impact on Australian domestic prices.

In Australia, LNG prices for export are expressed in A$/GJ, which includes plant processing (mainly liquefaction) as well as fuel and shipping costs to big customers such as China and Japan.

However, if you strip out the processing and transport costs, you get the LNG netback price, which is directly comparable to our own domestic prices.

For most of history the LNG netback price has been higher than the domestic price. When it has been lower, export customers are getting their gas relatively cheaper than domestic customers. This situation occurred when oil prices (which drive the gas price) were depressed, as you can see in January 2020 from the chart below. 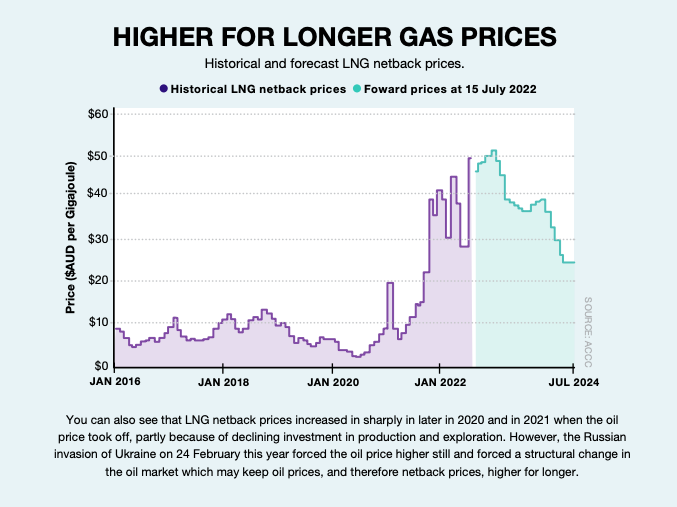 You can also see that LNG netback prices increased in sharply in later in 2020 and in 2021 when the oil price took off, partly because of declining investment in production and exploration. However, the Russian invasion of Ukraine on 24 February this year forced the oil price higher still and forced a structural change in the oil market which may keep oil prices, and therefore netback prices, higher for longer.

The consequences for the LNG netback price are two-fold: 1. A higher for longer oil price means gas prices will stay higher because of their linkage; and 2. There will be times when LNG as a commodity will be in short-supply, regardless of what happens with oil. The bottom line is to expect more volatility in gas prices, erring on the upside.

Clearly energy markets have been impacted by reductions in gas flows from Russia into Europe. LNG deliveries to European sites have increased by around 3m tonnes per month in the three months to 30 June (2Q22) with gas available due to the Covid related slowdowns in China. As the economic giant recovers however, the LNG market will again come under pressure. The situation is very fluid.

Nobody is immune from global events. There is evidence that overseas gas pricing is now impacting Australian prices.

When gas demand is higher than what contracted or gas supply contracts provide, consumers face the risk of paying the highest market export related spot rate for the gas. Governments have preferred to let the market decide prices, but the market is currently distorted by a war.

The domestic price in the Eastern States has been climbing from A$4-5/GJ five years ago to A$8-9/GJ. These prices relate to those big forces mentioned above, but also to the higher gas price required for new production infrastructure.

Western Australia runs to the beat of a different drum, but even it is seeing increasing prices. The state has a gas reservation system, which means that a certain proportion of gas reserves are for domestic use. This has kept prices low and well below prices in the Eastern States.

However, limited new discoveries and stronger demand in WA driven by mining and chemical plants, has caused WA gas prices to rise off their lower base of A$3/GJ over the past decade, to doubling current levels of A$6/GJ.

To find out which Small Cap gas producers we recommend join now for just $59 a month.