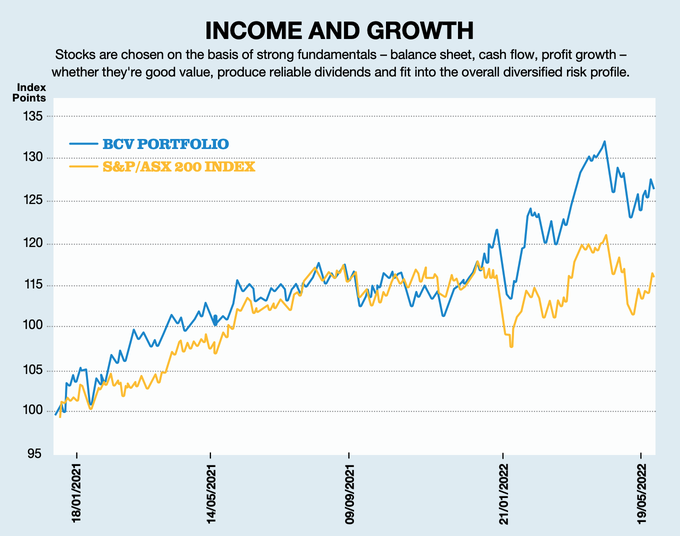 The outperformance of Blue Chip Value Portfolio's performance is accelerating as investors hunt for value due to uncertainty in global financial markets.

Subsequent to the start of the sell-off in mid-December the BCV Portfolio has outperformed by over 12 percentage points or 1,240 basis points against the benchmark S&P/ASX 200 Index! The BCV Portfolio is now easily outperforming over all periods, in the past two years generating over 22% a year in returns.

The performance of the Blue Chip Value Portfolio since its inception proves that focusing on stocks that aren’t expensive and produce strong and stable earnings, and deliver consistent dividends really does work!

Highlighting how investing for yourself with an eye for value trumps buying into market momentum.

The question is whether this outperformance continues?

While we are not in the business of exact market timing, it’s still worthwhile thinking about whether to take profits after outperformance.

Due to considerable uncertainty, we believe that Value stocks will continue to outperform. The market, both the US benchmark S&P500 and our own are still trading on high multiples relative to their historic average. Six months of selling does not wipe out a lengthy bull market’s frothiness.

You have to be circumspect about buying the dip, which is why stock picking is paramount.

The big concern remains inflation induced rising interest rates, which were highlighted by this week’s National Accounts that showed the Australian economy growing at an inflation adjusted rate of 0.8% in the March quarter, but rising a giant 3.7% in nominal terms and 10.2% over the year.

Although the press focus is on the adjusted GDP rate, central bank economists focus on nominal GDP because it’s a dollar value. This means it’s the best gauge for aggregate demand. Consumers don’t take inflation into consideration, they just spend.

The growth rate in nominal GDP is well above what the economy can withstand. Aggregate demand is growing faster than aggregate supply can keep up with. Because this growth rate has been occurring for the past 12 months, inflation pressures are inevitable and not simply “transitory”.

As we have mentioned previously, both our own RBA and the US Federal Reserve underestimated these trends and let monetary policy remain loose for too long amid historically high government spending.

This policy error is now being remedied with higher rates. In Australia, a series of interest rates rises of 0.25% each, at least for the next few months is probable. This is mirroring the scenario in the US, where this week the US Treasury Secretary Janet Yellen, a former Fed Reserve chair, conceded she got it wrong last year when she argued the country’s inflation pressures were largely temporary.

Buy stocks that deliver a value shelter, including Blue Chips with strong and stable dividends. Our BCV Portfolio provides great examples. We also buy Small Caps that have strong fundamentals – cash flow positive, net cash or low debt and are growing earnings. Under the Radar Report will show you which ones.

In Blue Chip Issue 105 we cover 2 strong performing, and relatively cheap utility stocks. One of which has projected cash flows that the market is assigning a punitive discount to. While this is also the case with ORG, we are pulling back our recommendation to reflect the likelihood of consensus earnings forecast reductions in coming weeks due higher coal prices.

The banks are outperforming and we remain happy with our four holdings. Our big resource exposure has been under pressure, with the notable exception of energy services group Worley (WOR). Amcor (AMC) has also been a big driver of outperformance and we are happy holders.

Telstra (TLS) is holding up, also protecting us against the poor performing retailers, which we are holding on to in light of their strong value.

Value doesn’t lift all boats at the same time, but it’s lifting the mothership in the form of the BCV Portfolio, which highlights both the value philosophy and the importance of diversification. It’s a strategy that helps you both sleep at night and generates spending money from all those dividends.